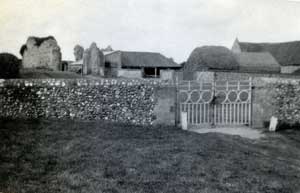 Old boundary walls before the cemetery was enlarged, looking towards the gatehouse 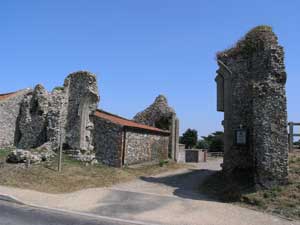 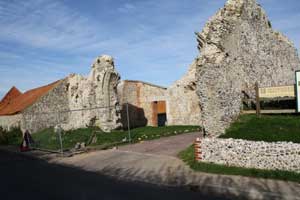 The gatehouse of a monastic precinct was not normally a defensive structure - the walls around the enclosure could easily be scaled. It was however still important as it was the only means of access to the monastery and its other buildings: it emphasized the passage from the secular world to the regulated monastic world -the little heaven on earth.

The Binham gatehouse had a double arch on the front - one large enough for carts and horses to pass through, and a small one for pedestrians only - but a single one leading to the priory court. Inside, was a small room for the porter, and everyone entering would have to seek his permission before going further. A window has also been found while the gatehouse was being restored, showing that the porter also had to keep his eye on what was going on in the priory court (the section between the priory itself and the gatehouse), where carts would be unloaded, and rents in kind collected. No one was allowed inside the priory precincts, and any negotiations would have been done by the cellarer in the Outer Parlour just off the courtyard.

It is evident that above the porter's lodge, there was another room, which was very probably where he lived. The gatehouse has long since been called the 'gaol', and it may well be that part of the gatehouse was used for that function. The Priory owned the manor of Binham, and so as lord of the manor, the prior would hold courts and be responsible for law and order; something that might well necessitate people being held in custody for a time, and they could not be held in the actual priory precincts. Equally, the name 'gaol' may have come from a much later time after the dissolution of the priory, when the 'old gatehouse' began to be used for that purpose by the parish authorities.

The front of the gatehouse would have been decorated with statues and possibly the coats of arms of the priory's benefactors. These would have been painted in bright reds, blues and other colours, which would have stood out against the white dressed stone of the facade.

Matthew Paris tells us that when Prior de Parco built the west front of the church, he also built a wall from the gatehouse to the Chapel of St Thomas. The Chapel of St Thomas a Becket no longer stands, but by tracing the length of the only wall that runs from the gatehouse, it seems probable that it stood just outside the gate to the parish church. There are earthworks in this position of the size we could expect from a free-standing chapel, which have not yet been excavated. There was a guild of St Thomas at Binham, and presumably they helped to maintain the chapel and met there.