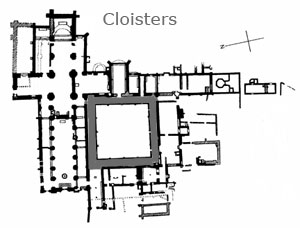 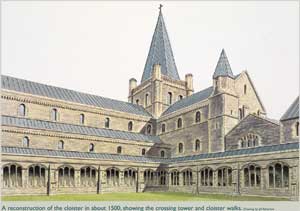 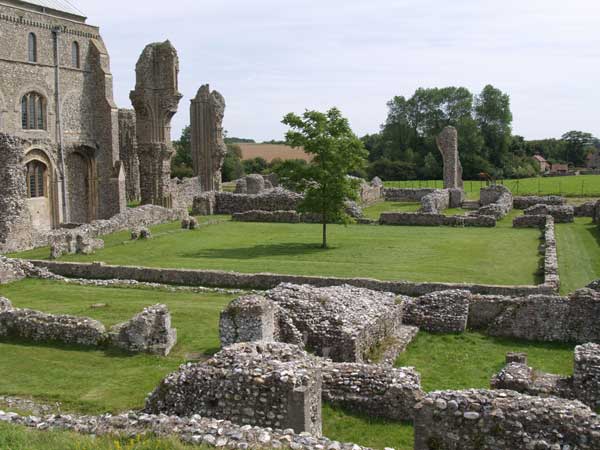 The Cloister (from the latin claustrum - 'an enclosed place') was the hub of the life of the priory, rather like a passage-way, from which all other rooms lead off. (See the sketch plan of the medieval priory). In the centre there was often a garden in which the monks would grow herbs for medicinal purposes and for cooking, and this central area was known as the Cloister Garth. A garden needs water, so often there is a well in the centre of the garth. Sometimes however it was left as grass, and special gardens were attached to different parts of the monastery - the herbularius or herb garden for medical purposes might be located by the infirmary; the hortus or vegetable garden nearer the kitchens; and there was probably an orchard for fresh fruit. Binham had fishponds to the North West of the priory. The priory held many lands and manors in the area, and they would receive food as a rent from their tenants, which would be stored in the barns which lie between the priory proper and the outer walls.

The cloister itself would have a roof supported by columns on the inmost side facing the garth (you can see the remaining bases on the left of the cloisters in the picture above). Between them would be windows which were sometimes glazed with plain glass. This is because the cloister was a working area for the monks as it was the lightest part of the whole priory. The north side, facing south, which received most sun (on the left of the picture) would have seats in, and might have cupboards and desks where monks would read books from the library; there is the remains of a book cupboard at the north-east end of the cloister. Sometimes they would be provided with Carrels, which were wooden cubicles with a door and canopy to keep out draughts. The copying of manuscripts tended to be done in the South Alley of the cloister, which benefited from pure northern light, without the shadows from the windows created by the sun. In other sections you might find older monks teaching younger ones about the faith - but also to read and write.

The South Cloister also bordered on the Refectory, and in the west corner there is a laver - a place where people could wash their hands before going to eat. The monks were very keen on hygiene, and the priory has a complex water and drainage system.

Cloister gravesSenior members of the community, like the prior, were often buried in the cloisters, while important patrons and donors would be buried in the Presbytery or the Chapter house. Some of the tombs in the church would be quite grand (see South Transept), but a prior's grave would probably have been marked by a simple slab or possibly later by a brass inscription placed adjacent to the grave on the cloister wall. The tombstones in the illustration are in the East Cloister, not far from the Chapter House. There may well have been a monks' cemetery next to an infirmary, east of the Chapter House. These graves would have been unmarked and the ground would have been reused as necessity arose.

When the priory was dissolved at the Reformation, the cloisters with the rest of the priory (except the Parish Church) were pulled down. As the south aisle of the nave was also removed, some of the cloister windows were used to fill in the resulting gap in the present south nave wall.