The West front and the west windows of the North Aisle were blocked in some time between 1738 and about 1780 while the North Aisle was still standing. The Woolooth picture above is a reconstruction of its original state based on the Buck engraving of 1738, but with the tracery of the windows having a brick infill.

Perhaps the most striking feature of Binham Priory is the magnificent west front, first seen as the visitor approaches from the west. Not only is it visually impressive due to its size, the contrasting colours of brick and stone, the play of light and shadow on the intricate arcades and mouldings, but it is also historically important due to its probable place in the development of Early English gothic architecture in 13th century Britain.> 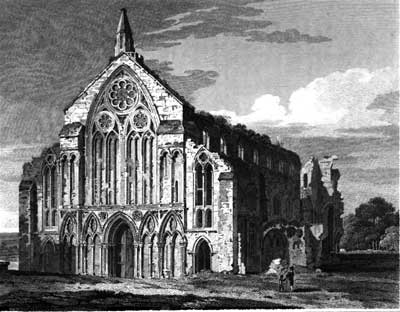 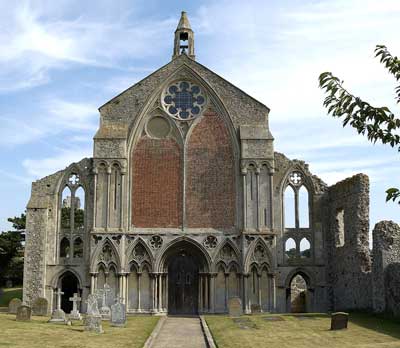 The West front of the priory as it is today.

Perhaps the most striking feature of Binham Priory is the magnificent west front, first seen as the visitor approaches from the west. Not only is it visually impressive due to its size, the contrasting colours of brick and stone, the play of light and shadow on the intricate arcades and mouldings, but it is also historically important due to its probable place in the development of Early English gothic architecture in 13th century Britain. 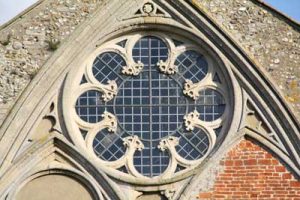 Evidence suggests that the west window at Binham Priory may exhibit the earliest surviving use of bar tracery in Britain. This was an innovative way of using stone to create the patterned framework for glass in a window, first developed in France at cathedrals such as Rheims (1211-41) and Amiens (1220-39). In bar tracery the framework was made by piecing together finely cut ‘bars’ of stone, rather than cutting out patterns from larger pieces or ‘plates’ of stone. The transition from plate tracery to bar tracery eventually made possible the extensive walls of glass characteristic of gothic architecture, which can be seen in British cathedrals such as Lincoln or Gloucester, where the stonework is finely patterned, carrying large expanses of glass. If Binham Priory was the first building in Britain to use bar tracery, it was clearly at the forefront of architectural developments in the thirteenth century.

The main evidence to suggest this is the chronicles of Matthew Paris, where it is stated that Prior Richard de Parco, who ruled from 1226 to 1244, was responsible for building the west front. This dates it before 1244, which is before the earliest known bar tracery, at Westminster Abbey, dated after 1245. It is possible that there were other early examples of bar tracery at Windsor and at Lincoln which have not survived, but it seems that Binham is the earliest extant and definitely dated example. 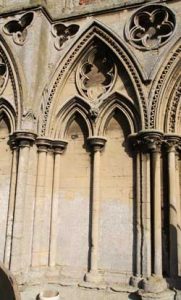 Looking at the west front as a whole, it can be seen that there are three vertical parts:the central part with the great west window which would once have lit the nave but which was bricked up in the 1809, and the two aisle windows on either side which would have lit the aisles, but which are now so attractively open to the sky. 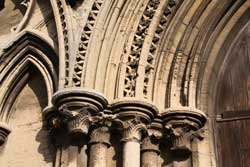 Horizontally the west front divides into two, with the lower level corresponding to the lower arcades of the interior nave. Here the greatest amount of decoration can be seen. Flanking the central door on each side are two blind arches, each further divided into two. In the spandrels and heads of the arches a variety of patterns are pierced into the stonework: quatrefoils, cinquefoils, trefoils and sexfoils, culminating in the octofoil at the head of the west window. The arches are surrounded by mouldings, enlivened with dog tooth carving and supported on slender columns, each surmounted by a capital. Around the doorway the capitals are carved in a crocket design, each carved from a single stone.

Aisle On either side of the nave, separated from it by columns or piers of an arcade

Arcades Series of arches supported by piers or columns

Bar tracery Stonework pattern around glass, made up of separate carved pieces of stone

Billet Norman stone decoration of small rectangles around an arch

Clerestory Top storey of a nave, with windows

Crocket Early English ornament, on a capital or pinnacle

Gallery An upper storey above the nave or aisle

Heads Space at top of arch, filled with tracery in a window, such as quatrefoils etc

Mouldings Shaped strips of stonework around arches, windows or columns

Norman Style of architecture from c.1066 to c.1190, characterised by rounded arches and massive stonework

Plate tracery Stonework around glass in a window, made by cutting shapes into masonry

Spandrels Roughly triangular space between adjacent arches or between the arch and its containing space, decorated with quatrefoil tracery etc