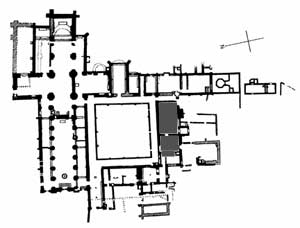 The Refectory or Frater is where the monks had their meals. It consisted of two rooms, one larger than the other, positioned directly opposite the warming room (the fireplace of which can be seen in the background). 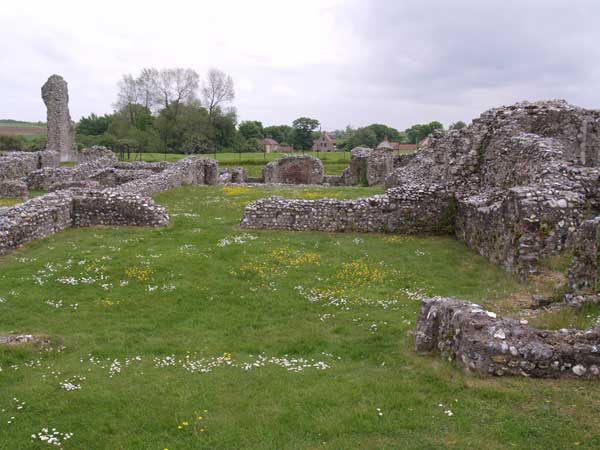 The Misericord is in the foreground, and the refectory beyond the low central wall. On the right the remains of a large water tower can be seen.

By the time of the late middle ages, the monks' diet had become very similar to that eaten in genteel households; Benedict's original rule had long since been compromised. The original rule was based on the Christian year: monks were to eat dinner ever day of the year, but supper only from Easter to 13 September, but (after Pentecost) not on Wednesdays or Fridays. Dinner was eaten at 11 or 11.30am, comprising two dishes of flour, beans, eggs and cheese from which a monk could choose one, followed by fruit. There was a daily ration of a pound loaf, but a third of this had to be saved for supper. Flesh-meat was forbidden except to the sick. It was eaten in the refectory in complete silence, the monks listening to a reading often from the lives of the saints. Communication was by sign language, and several of the monastic manuals for signing have survived. One of the Benedictine signs, the forefinger placed across the lips for silence, is universally known.

Living on one meal alone from mid-September to Easter, the coldest part of the year, became difficult for monks in Northern Europe, so they found a temporary remedy in the growing number of saints days in the calendar – surely on such days they should celebrate with an extra supper! Even on ordinary days, the two courses Benedict had stipulated as alternatives, were both served to each monk, and often a third dish of fruit or vegetables was added. By 1150 chickens, game birds and meat were being eaten by monks on a regular basis.

They were however reluctant to throw over Benedict's rule entirely, so they began to ask (not Should we eat meat? But) Where should we eat meat? Surely not in the refectory, as Benedict forbids it - only regular food and meals may be consumed there. So it became usual to build a room attached to the refectory called the misericord (latin = mercy) where irregular food including meat could be eaten. While remembering that some of the community had to eat together in the refectory, the monks could move adroitly from one room to another, and so managed to have dinner and supper on 5 or 6 days a week throughout the year, and to eat meat on four days a week and fish on Fridays. They further made a distinction between a meal and the food eaten at it, so on the remaining supperless days they began to add extra dishes to dinner to represent what they would have eaten had there been a second meal.

What the monks ate.

The first dish at dinner was pottage, made with oatmeal and containing vegetables or pieces of meat or fish, according to the day and season, followed by two other dishes as outlined above. On top of this they often received pittances. These on major festivals (about 70 a year) could be dishes of small birds, expensive freshwater fish and game. The meal then ended with cheese. They would also have their bread ration, and normally ale, but on about 100 days throughout the year, wine was served as a celebration. Those who ate in the misericord would have their meal served in messes (dishes) of meat for four monks to share at dinner, each containing about 3lb of edible meat of beef, mutton and roast pork. This meant that a monk would probably eat about 2.25 lbs of meat a day.

Supper, served in the late afternoon, was a light meal of a single cooked dish or two, followed by cheese, and washed down with the remaining allowance of ale. If hen or chicken (always served with mutton) was allowed, the daily ration of meat would go up to about 3 lbs per monk. However a monk did not necessarily eat meat each day in the misericord, so the ration drops to a little under 2 lbs per day.

Monks however were not expected to eat everything set before them. Not only would that show greed, it would be inconsiderate, for many servants and lay brethren received not only allowances in cash and kind, but depended to a large extent at meal-times on the leftovers of the refectory, and in some places dined there occupying a special table, known as 'the table for the poor'. There was evidently enough bread and ale left over from the monks' allowances and enough cooked food, to cater for these people.

There were also those known as Corrodians who lived in the monastic precincts. A Corrody was a special form of pension or annuity; some were gifts from the monks, but most paid for them in advance either in cash or by giving the monks part or all of their land. From the monks point of view they had cash (or rent) in hand, from the corrodians they had a degree of security unobtainable outside the cloister. These allowances were in kind - fuel, light, clothing, free housing and food for life - but details as to what each person was entitled to, differed depending on the contribution they had made to priory finances. Corrodians would be housed in the monastic precints, and a spouse and child might share the accommodation, though an unencumbered male might be offered a chamber in the monastery itself, probably in the infirmary. They were by the nature of the transaction, unlikely to be members of the truly poor; some bought corrodies and then sold them on to other people as an investment, and never resided in the monastery; some men bought them to provide a degree of security for their spouse, so she was not dependent on their children - and in both their minds must have been the thought that in their old age and infirmity they would be rendered secure and moderately comfortable; everyone had their own motive, but above all it was an attempt to achieve some stability in life, in a precarious medieval world.